Streeties are not feral dogs

India has several different free ranging dog populations – street dogs, stray dogs, feral dogs & wild dogs. Each of these are distinctly different, but unfortunately all of these terms are used interchangeably, even in academic circles. This gets in the way of understanding these dogs and identifying solutions to issues of their welfare, human-animal conflict, public health and wildlife. With such a massive free ranging population, ignoring the distinction and using the terms interchangeably does not serve us well.

Street dogs are not wild dogs. Wild dogs are not even dogs (Cuon Alpinus) and stray dogs are ex-pet dogs, who, if not lucky enough to get rescued and rehomed, rarely have the skills to survive on the streets. Street dogs are not feral dogs either. The lack of this particular distinction, unfortunately, is what does these dogs the most damage. In fact, according to Dr. Anindita Bhadra, an associate professor of animal behavior at IISER who specializes in street dogs, “This term feral is very problematic in the Indian context. Technically, feral is an animal with an immediate past history of being domestic. By that definition, only a miniscule proportion of Indian free-ranging dogs are feral. If we are talking about free-ranging non-urban dogs, that live and sometimes hunt, in large packs, guessing from reports, it sounds like it may be as low as 5-10%”. Apart from the technicality, we are also talking about dogs that have distinctly different behaviours, which we must pay heed to, if we are to understand these animals.

“This term feral is very problematic in the Indian context. If we are talking about free-ranging non-urban dogs, that live and sometimes hunt, in large packs, guessing from reports, it sounds like it may be as low as 5-10%”

The key to understanding the behavior of an animal is to consider their natural history. Dogs are the only animals to have maintained such a successful free ranging population, that is not wary of humans, for more than tens of thousands of years - well before humans even started domestication. Which is why experts now believe that the dog’s story with humans is not one of human initiated domestication at the dawn of agriculture, but a story of coevolution that started several tens of thousands of years earlier[1]. And that story continues to play out with our street dogs of India. This gives us the perfect opportunity to understand the adaptations of a dog, that resulted in humans not just tolerating a predator in their midst, but also caring for them, like family.

...the story of humans and dog is a story of coevolution that started several tens of thousands of years earlier[1]. And that story continues to play out with our street dogs of India...

While most canids are believed to be pack predator animals, studies on street dogs show that these dogs have a far more fluid and flexible social structure, preferring more to be solitary beggars or scavengers working in smaller groups. Large groups of dogs make humans nervous and it is hard to imagine humans tolerating intimidating packs of predators in their midst. [2]

These animals also have a genetic modification from that of their carnivore counterparts, that gives them the ability to digest specifically cooked carbohydrates. [3] This allow these dogs to survive scavenging off human garbage in particular – a useful adaptation for an animal living beside humans. Animals that hunt or hurt livestock would have been selected against very quickly.

But the most impressive of all, perhaps, is the dogs' adaptation for begging. A recent study even shows that dogs have evolved special muscles in their face to make their eyes bigger [4] and an older study shows that they rely heavily on eye contact to beg[5]. Unlike wolves, dogs show far more vocalizations in their communication, at least 7 different types of barks alone [6], because humans are more receptive to vocal signals. Dogs also use something called calming signals [7] to communicate with each other, but dogs are unique in that they try to use them to communicate with us too[8]. At BHARCS, our students study the inherent communication that exists between street dogs and humans, with a special focus on signals we can use, that dogs understand and interpret very accurately. We use these signals on dogs to stop dogs from coming towards us, drawing boundaries on how they interact with us, giving directions on where we want them to move etc...The first person to talk about these signals is the Norwegian canine behaviour expert, Turid Rugaas and we observe these signals being used by people in India on street dogs. Clearly this communication is universal.

...Apart from evolving rather sophisticated ways of communicating and collaborating with humans, dogs have also consistently been evolving and modifying themselves and their skills to be useful to humans...

Apart from evolving rather sophisticated ways of communicating and collaborating with humans, dogs have also consistently been evolving and modifying themselves and their skills to be useful to humans. Their territorial nature makes it easy for them to patrol neighborhoods and alert the humans of intruders. They also keep rat and pigeon population in check. Considering dogs can be caught and vaccinated, while rats and pigeons cannot, they also play an important role in disease control[9]. And lastly, dogs are also known to be physically and behaviorally modified to look and act like juvenile animals all through their lives, traits that are known to make them very endearing to humans. [10]

Humans have not been a very tolerant species and the natural history of most animals meets untimely ends when their paths cross with humans. The few that survived did so by learning to be highly wary of humans. It is no surprise then that the dog needed so many adaptations to have made it in such close proximity to humans over all these years.

...Coming to feral dogs, western free ranging dogs are often stray dogs and not really allowed to move into towns and cities. Many end up living outside of human contact, which perhaps makes them feral...

We now come to feral dogs. Western free ranging dogs are often stray dogs and not really allowed to move into towns and cities. Many end up living outside of human contact, which perhaps makes them feral. These dogs tend to organize in large groups and are highly wary of humans. We see similar behavior in dogs in India that are more removed from human populations, living mostly on the fringes. What makes these dogs behave so differently is unknown. While studies in the field of epigenetics show that fear can be passed from one generation to the other[11], in the case of these dogs, there may be several more factors at play. We do not even know if these dogs “become feral” or are born that way.

Then comes the issue of dog-wildlife conflict. Who are these dogs and what makes them so much more skilled at hunting? INDog & village expert, Rajashree Khalap suggests that some may be learning it as a result of living with hunting tribes, some could be a result of villagers encouraging the dogs to be wary of wildlife or it could be a result of displaced dogs. She further goes on to distinguish between city dogs, village dogs and dogs living slightly away from dense human populations as having distinct behavior profiles of their own. Dr. Bhadra speculates that dogs living on the fringes of villages and are wary of humans may also resort to hunting, since scavenging and begging becomes less viable to such animals. It is evident that this area needs more study, but it is also clear that these dogs are nothing like street dogs and what we do to address street dog issues will make no impact on these areas.

...in the case of conflict involving streeties, the solution to conflict is something we have a very good understanding of, between rescuers, streety guardian and AWOs...

This is not to suggest that street dogs do not get into conflict with humans or other animals. But in the case of streeties, the solution to conflict is something we have a very good understanding of, between rescuers, streety guardian and AWOs. Several NGOs have managed to address the public health issue in certain areas with diligent vaccination programs that are increasing herd immunity[12]. Streety guardians are people who care deeply for their streeties and they are well aware that if their dogs are found hurting humans or livestock, the dogs will get killed. So, they are very good at converting whole groups of dogs friendly, with simple tools like touch, food and health care. Studies show that something as simple as touch can work even more effectively than food in gaining a dog’s trust. That is what a dog is. A dog is hardwired to be useful, friendly and cute to humans. This should make it terribly easy for us to shape the population so they pose no risk to us bring value to us, as community animals.

"...Dogs, thanks to human selection pressures, have evolved to not want to hurt us or what we value , but to deeply care about what makes us happy [13]. We just cannot leave that aspect of a dog out of discussions about dog and problems arising as a result of their behaviour..."

Unfortunately, due to the ambiguity in terminology, dogs that display unusual violence towards humans or other animals are being bucketed together as “feral dogs” and further we are extending that label on to street dogs. This is like making generalizations about the most violent of all humans and then using studies on them to explain human behavior in general.  Dogs, thanks to human selection pressures, have evolved to not want to hurt us or what we value , but to deeply care about what makes us happy [13]. We just cannot leave that aspect of a dog out of discussions about dog and problems arising as a result of their behaviour. Streeties are not feral dogs, they are community dogs, waiting to be allowed to take on the role they evolved to be good at. How we label these dogs matters. It determines how we look at them, how much we understand them and how effectively we resolve our conflicts with them.

Sindhoor is a canine behaviour consultant, Galen myotherapist, an engineer by qualification and an educator in Bangalore, India. She is passionate about ethological studies of free ranging dogs in India. Sindhoor is the founder of BHARCS.BHARCS offers a UK-accredited level 4 diploma on canine behaviour and ethology and boasts of students from all parts of India and across the globe. Sindhoor is also the country representative for Pet Dog Trainers of Europe (PDTE). While she wears many hats, being doggy-mommy to her dogs, whom she considers her inspiration and her greatest teachers, is her favourite role.

6. Barking, the sound of a language by Turid Rugaas

9. The success of ABC-ARV Program in India

11. Study finds that fear can travel quickly through generations of mice DNA

Keynote speaker at the PDTE summit

How dogs learn to cope

Keynote speaker at the PDTE summit

Streeties are not feral dogs

Seeking consent of a dog 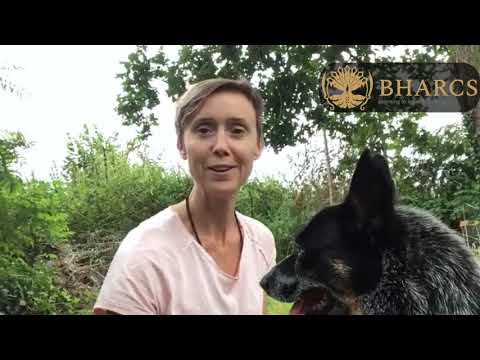 What's all the fuss about Fetch?